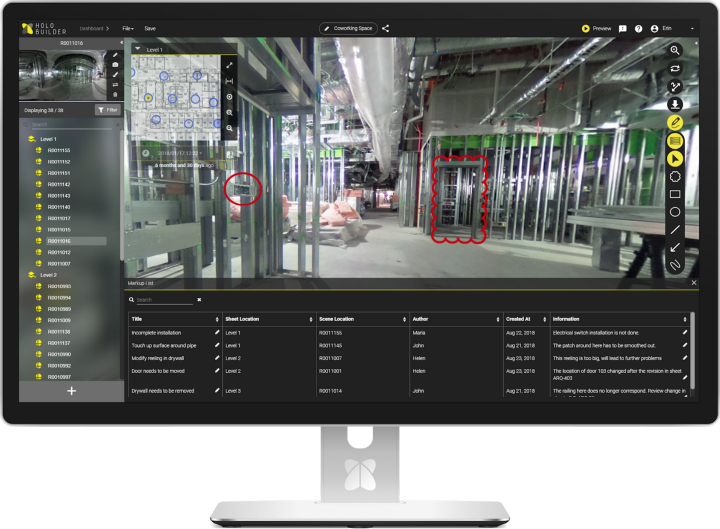 360 Markups: Show Where The Work Is And Take Your Design and Construction Collaboration To The Next Level

Adding powerful, spatially organized information to the 360° environment of your digital replica is a game-changer for seamless communication of key items and better team collaboration.

From broken door latches over unsmooth wall finishings to debris on floors — you’ll notice many open todos during your job walks in your construction projects. Of course, you’d like to communicate them to your team. If you do your job walk remotely and go where the work is virtually with HoloBuilder, you now have a 360° counterpart to drawing markups and taking notes on your physical sheets to inform your team later on:

Mark up your virtual construction site’s 360° images with 360 Markups, add powerful information to gain an actionable understanding of what is going on and what has to be done by managing them in a 360 MarkupList.

The added contextual information (comments, notes, etc.) is automatically added to the 360 MarkupList. All markups placed on 360° images are tracked in the list so you always know by whom, when and why a markup was added. The 360 MarkupList is accessible to every project collaborator and downloadable as a CSV file for offline viewing.

The highlights of a 360 MarkupList at a glance:

Why is a 360 MarkupList the next big thing for collaboration?

When markups and markup lists were initially introduced for PDF a few years back, it changed the industry. The next big step, adding markups and creating a list directly within a digital 360° environment, is truly unique. We bring what you know and love into your 360° digital replica: Mark up your virtual construction site’s 360° images and know where markups belong on site!

The feature is invaluable for seamless communication of key items and better team collaboration: It enables you to mark areas or objects in the HoloBuilder Web Editor to point out issues, communicate errors, changes, revisions, highlight machinery, and anything else that needs to be mentioned or to simply add general notes, which can be easily updated from remote. The 360 MarkupList will make sure that every collaborator is on the same page and nothing falls through the cracks. To eliminate the case of “the left hand doesn’t know what the right hand is doing”, you have all relevant information about issues at a central location — No need to work with and sync different lists from different team members.

Working with a user-friendly interface for design and construction collaboration: A detail view of a 360 MarkupList on the left, next to the a 360 “Cloud” Markup on the right.

Who can benefit from a 360 MarkupList?

In general: Everyone from the construction project team! To provide you with concrete examples, allow us to outline some usage scenarios.

Overall, there are many possible scenarios for 360 Markups and a 360 MarkupList, whether you are working with multiple projects or a single one, with 360° photos or renderings. For any phase of construction, the 360 MarkupList provides a powerful way for you to highlight and communicate what is happening on site.

Watch the video and see how you can benefit from 360 Markups and the 360 MarkupList in your HoloBuilder 360° environment.

This is just the beginning: What’s next for the 360 MarkupList?

Direct interaction between project team collaborators via the 360 MarkupList is on the horizon! For faster communication of which items have been resolved or became irrelevant, you will be able to set a status like “completed” or “rejected” directly within the 360 MarkupList. This will help you to see work progress much faster. On top of that, you will be able to directly reply to certain markups for getting a deeper understanding or for clarifying any open questions. It enables you to start a conversation with responsible team members directly where it matters.

Imagine being able to not only quickly check how many doors are already built in or how many are still missing, but to make relevant calculations about the project outcomes based on this and other data in the 360 MarkupList. Knowing how much material still needs to be ordered can save you a lot of time and will support you by getting a financial overview quickly.

Besides, we know, that every construction project has its unique properties and requirements. To meet those special requirements you will be able to customize the 360 MarkupList according to your needs. Maybe you would want to display the due date of all open tasks or you want to add a list of needed machinery. No problem! Just create a new custom column, name it how you like and insert the relevant data. You can also delete other columns if you don’t want them to be displayed.

As you see, the game-changing potential of this feature is huge for your construction and design collaboration. Do you want to learn how to get started with 360 Markups in your HoloBuilder project? Just head over to our comprehensive tutorials!

Every feature that we build is carefully co-developed with our customers, the whole HoloBuilder team thanks you, our community and customers for the many hours of feedback that you have provided to make this feature possible.

If you’d like to suggest an addition to 360 Markups or our portfolio that would make your life much easier, please send us an email.

We are looking forward to hearing from you! Thank you 🙂 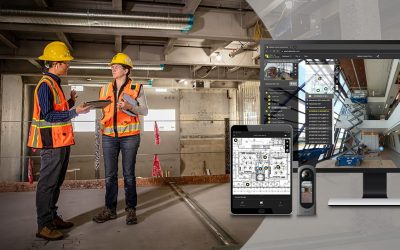 Eliminate the risk of disputes and improve stakeholder relationships with streamlined construction workflows.

END_OF_DOCUMENT_TOKEN_TO_BE_REPLACED 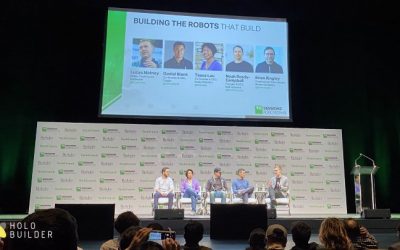 How are robots going to transform the construction industry and what’s needed to make it a success story when they’re becoming a part of the job site crew? Read what experts of Boston Dynamics, Toggle, Dusty Robotics, and Built Robotics said at UCB in March 2020!

END_OF_DOCUMENT_TOKEN_TO_BE_REPLACED 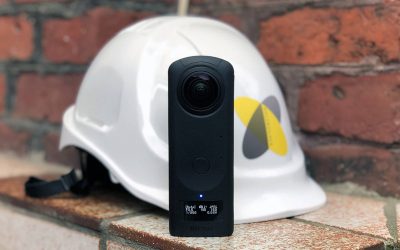 The wait for a new high-quality option for your construction documentation is over! Our partner Ricoh just announced their new flagship 360° camera “Theta Z1” that is supposed to ship in late March 2019 and it is a huge step forward in almost every aspect. While it might not be for every jobsite due to its nearly $1,000 price tag, we think there is great potential for the larger jobs out there, and here is why!